Fans of cheese generally travel to Emilia Romagna, Italy, to taste the King of Cheese. They may hope to learn about Parmigiano Reggiano and assume they will taste ricotta, and probably other types of Italian cheese. Only true cheese aficionados travel to Emilia Romagna to learn about formaggio di fossa, or cave cheese. How many people have even heard of cave cheese or could answer the question: “What is cave aged cheese?”

What is Cave Aged Cheese? At its most simple, this is cheese aged in a cave. There is more to it than that, though. Certainly, folks in Emilia Romagna, Italy, know formaggio di fossa, and maybe Italians, in general, know about cave cheese. But, this is a foodie find. Something only hardcore Italian food lovers will know about or search for.

Because of its rarity, I knew that tracking down cave cheese in Emilia Romagna was a must do. This experience was like something you’d see Anthony Bourdain talk about, or even better, Andrew Zimmern because as far as cheese goes, this is certainly a Bizarre Food.

There are several towns in Romagna that are known for cheese stored in caves. There are also other places known for cave aged cheese, including French cave cheese. Here we will focus on learning about the history of cave aged cheese in Italy and how to taste it. After a long morning tasting Italian wines with Helena from Yummy Italy, we started making our way to the village of Sogliano, high in the hills of Romagna. We were southeast of Bologna, and northeast of Florence, almost to Rimini and the Adriatic Sea. This was a part of Italy we’ve never visited before.

Earlier in the day, it was hot and moist, with blue cloudless skies. By the time we reached the hilltop village of Sogliano al Rubicone, grey skies had overtaken Emilia Romagna. A mist had set over the hills, making the entire experience seem a little, well, eerie.

We climbed the hillside in Helena’s car, in the grey and mist, to see a man about a cave filled with cheese. This is what I love about traveling in Emilia Romagna; I never before would have assumed those words would cross my lips.

The history of cave cheese dates back to the Middle Ages when the people of the region began hiding their food in large holes in the ground in order to protect the food supply from invaders.

The word fossa technically translates to the word “pit”, although cave cheese seems to be a more popular interpretation. Simply put, cave cheese is a pecorino sheep’s milk cheese that is aged inside a pit in the ground or pecorino di fossa.

Like other products we have eaten in Emilia Romagna, the formaggio di fossa is a DOP product, meaning there are strict regulations on how the product can be produced, or in this case, aged. I tried to listen and learn as much as possible to how they produce and age cave cheese. But it’s a more complicated process than I anticipated. Wheels of cheese are produced by the cheesemakers, like the ones we met at Fossa Pellegrini in Sogliano. They are also produced by farmers and people around the village.  The villagers will bring their cheese wheel to the owners of the pit. Each cheese wheel is wrapped in a cloth bag and tagged or marked in order to tell whose cheese is whose. They are also weighed before they are placed in the pit.

The pits are deep, up to 16 feet. The cheese cave is lined with straw, which creates a cool but humid space for the aging of the cheese. The straw is burned in the days before the pit is filled, to sterilize the cheese cave. More straw is added, along with scaffolding to keep the structure of the pit. They lower the wheels of cheese into the pit, piling them on top of one another. Then the pit is sealed with a piece of wood, as well as sand. A plaster-like substance is also used, which seals the pit entirely. The cheese cave is opened and filled in August. We actually had just missed the filling of the pit by days. Over a two week period, farmers and villagers arrive at Fossa Pellegrini, dropping off their cheese wheels.

The cheese wheels are left for about three months in the pits. During this time an anaerobic fermentation process occurs due to the lack of oxygen in the caves. Gravity takes over as the weight of one wheel on top of another presses all of the cheese and the fat drips out. This reduces the size of each aged cheese wheel. This fermentation process gives the cheese a particular smell and taste, which is what makes cave cheese so unique. The pit is opened and the cheese is revealed on Saint Catherine’s Day in November. When the cave is opened a noxious odor escapes the pit. It can be so strong that people have actually died from the fumes!

At this point, the aged cheese becomes formaggio di fossa, or cave cheese. People pick up their cave aged cheese and pay for the aging process based on how much the cheese weighs at the end of the process.

How to Eat Cave Cheese When the cave cheese emerges, it is entirely different from the softer cheese that was placed in the pit three months before. It is more firm, or semi-firm. The color is more yellow and, most notably, it’s particularly pungent, in both smell and taste.

The cheese maker at Fossa Pellegrini set out a few types of cave cheese for us to taste, along with a series of preserves, and of course, wine. The preserves were made from blueberries and cherries – their sweetness offset the pungent nature of the cheese perfectly. Honestly, I liked some of them, but some of them were a little too dry, or too chalky for me.

Something also occurs during the fermentation process that makes the cave cheese easier to digest by people who are lactose intolerant. So that’s good news!

In addition to eating the cave cheese on its own, it is used in a lot of regional recipes, including in one of the most unique pastas in Emilia Romagna, passatelli. It can also be sprinkled over pasta or served with honey or traditional balsamic vinegar.

, is available on Amazon now. 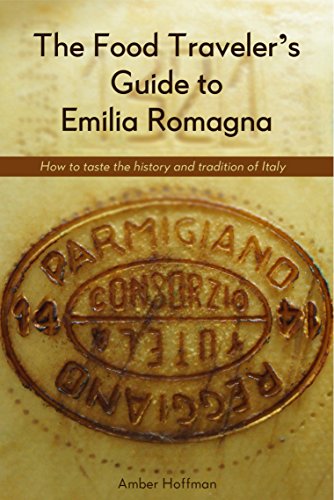 The Food Traveler's Guide to Emilia Romagna: How to taste the history and tradition of Italy
Price: $9.99

Yummy Italy arranged our tour to visit Fossa Pellegrini. Helena also translated so that we could learn about how to make formaggio di fossa. It’s possible to stop by the shops in Sogliano to purchase some cave cheese, but most of the shops either don’t run tours and tastings like this, or they don’t speak English.

I would definitely recommend booking a culinary experience through a company like Yummy Italy in order to arrange a unique tour like this one to learn about formaggio di fossa. If you are a true foodie, you won’t regret it.

Another option is to attend the cave cheese festival that occurs in Talamello each November. Talamello is also in Romagna, and they are also known for cave aged cheese. Just down the hill from the Talamello festival is the small town of Novafeltria, with an adorable renovated guest house, Palazzo Mattei. 2 thoughts on “What is Formaggio di Fossa? Learning About Cave Cheese in Italy”